We often have to capture images of our customers' products when they are in motion on conveyors. This is nothing new and this poses no real challenge providing the conveyor is not travelling at break-neck speed, and even then most of the time, simply adding more light and shortening the exposure time will see you through with no issues. However when we came across an application that required us to capture images of the top and the bottom of objects on conveyors, this provided us with some interesting obstacles.

The first thing that comes to mind, even to those who are not in the machine vision sphere, is the fact that conveyors (generally) tend to be on the opaque side, so the only option is to use a gap between two conveyors.

Now those in machine vision will say that this is no real issue as one can use a line scan camera, then your only issue is lighting. Well while this is certainly true, it’s not quite the full story, as the difficulty in lighting such a setup is very dependent on its specifics, to give you a better idea of exactly what difficulties one can encounter, let me talk you through our initial setup which served as a demonstration of proof of concept to our customer.

The setup which we assembled in our lab, and eventually at our customer’s site, used conveyors which had rollers with a diameter of approximately 15cm, and the belts had an approximate gap of 5cm, our lighting was a narrow beam bar light pointing at this gap at a slight angle so as not to be in the frame of the line scan camera.

Now you may ask why I am going into such detail, the reason is for you as the reader to appreciate that if let’s say our customer’s objects measure less than 40cm in the direction of the belts travel, as they go over this gap, they will start to fall, even if they don’t fall through the gap, this still leaves us with a moving target that we have to image, though this is no problem for the line scan per-se, it certainly is not desirable as it will lead to distortion.

The solution to this may seem obvious, maybe even facile, to some, just use conveyors with smaller rollers, make the gap as small as you can, and set up your light so that it’s shining nicely between the gap, sounds simple enough, and indeed it is that simple when you have the space to do so. Ah but did I mention that space under the conveyors is at more of a premium than property in London in this case? That complicates things somewhat.

The fact is that our light was simply not focused enough, if we pointed our light between the conveyors, a lot of the light would have been shining on areas other than the gap and this scattered light only serves to hinder our image acquisition.

Our solution was to focus the light more using cylindrical lenses, however these could not simply be placed in front of the light and shone directly into the gap because there was not the vertical space to do so. Horizontal space however was more readily available, so we adopted a hybrid lighting system that utilised plane focused light, and a technique known as coaxial lighting. 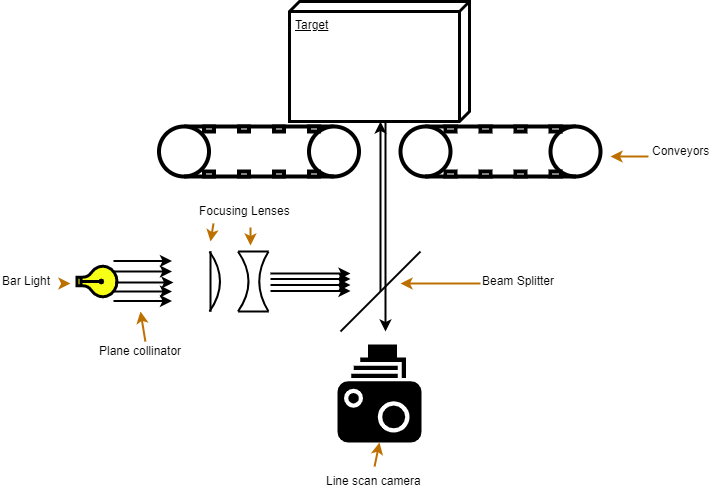 The plane collimators allow the light to be diffuse in the plane parallel to the conveyors, and hence diffuse in the plane that the gap between the conveyors and the line scan camera are located in, but have very little diffusion in the perpendicular planes, hence drastically reducing the amount of light that ‘misses’ the conveyor gap that leads to the unwanted hindrance of our image that I spoke of earlier, also, taking this plane collimated light and focusing it with the cylindrical lenses allowed us to shrink the gap to only a few millimetres.

A little about us

Scorpion Vision UK provide machine vision systems and expertise, we offer first class support for all our software and systems