The humble swede is a popular root vegetable in the UK and can be purchased in any supermarket or smaller grocery store. The nationwide consumption of this vegetable therefore is vast.

According to an article by the Telegraph in October 2019, searches for swedes on a national supermarkets' website are up 52% in the 12 months since the previous autumn. So not only are the swedes growing, the opportunity for producers of these root vegetables is growing also!

However in these times of geopolitical uncertainty, this may represent a challenge for the farmers and cooperatives that grow vegetables in their vast fields. Mechanically harvesting these veggies is not difficult but processing them once they have left the field could be, because in most cases, small armies of workers are required to trim the roots and heads, by hand. Have a look at the first few seconds of this video for an idea of what a typical commercial swede trimming set-up might look like.

The cost of so many people undertaking such a mundane job, on at least minimum wage is not insignificant. So there's a cost that has to be borne.

And then there is the availability of labour - or rather the lack of it. In 2019 it's getting harder to find the workers who will actually do this work.

So, as the market demand is increasing and the availability of labour is decreasing, the answer is to automate. Fortunately, the technology now exists that enables the automated trimming of swedes using robots equipped with 3D machine vision.

See the video below to see the 3D vision system inspecting the shape of the swede and working out where the cut lines should be placed. The cutting data is then sent to a control system which slices the top and tail off the swedes quickly and accurately. The return on the investment for the farmer is measured in months. 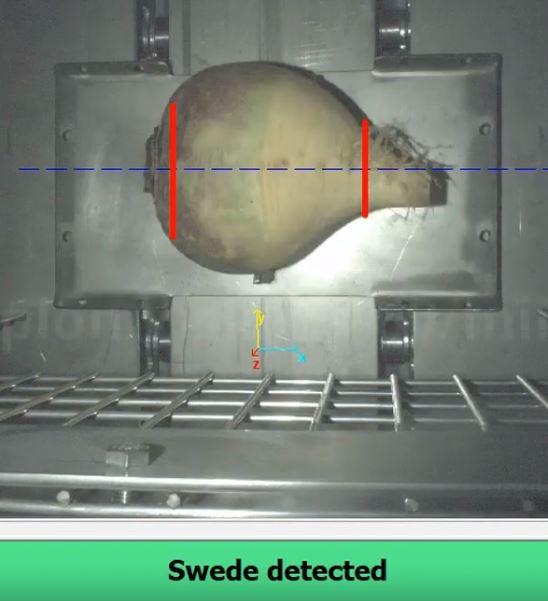 A little about us

Scorpion Vision UK provide machine vision systems and expertise, we offer first class support for all our software and systems